Trying to choose between Notion vs OneNote for your note-taking app?

OneNote is a note-taking app that is included with Windows and Microsoft 365. Notion is a free note-taking and workspace management app that has emerged as the cool kid in the world of internet productivity.

In this article, we’ll compare OneNote vs Notion side by side to determine which one is better between both.

Notion is a note-taking and project management app with a strong emphasis on collaboration. It includes building blocks that allow you to design your own customized workspace. The blocks can be used to create databases, notes, and workspaces. The database is where you keep all of your information, and the workspace is where you organize all of your content.

It also offers integration with Google Drive, GitHub, Evernote, Slack, Jira Asana, and Trello for more than just note-taking purposes. The interface itself looks clean and modern, but it’s not exactly intuitive or easy to use at first glance. However, once you get used to its quirks, you will find yourself using it every day without even realizing it.

Microsoft OneNote is a digital notepad app for both personal and professional use. It is part of Microsoft Office’s productivity suite and is available in app stores for iOS, Android, Windows, and macOS.

OneNote is used to create notes in a variety of formats and colors. Each note can be tagged by color label or category, with notebooks that are organized into folders.

It’s a simple app that allows you to keep track of all your ideas and plans.

Notion and OneNote are both great apps that can help you organize your notes for work or school. However, However, there are some key differences between the two apps. Here’s what sets them apart from each other.

Many people who are used to Microsoft Office apps will find themselves at home with the OneNote. It comes with the iconic Microsoft ribbon at the top which houses all the options.

The interface is intuitive, making the experience of using the application an enjoyable one. One can instantly see how to use this software with almost no instruction at all. Compared with Notion, which has a much more complex interface, OneNote’s user experience is simple and it does not take much time to get used to it.

Notion interface is a bit complex at first and might get some time to get used to it. You get a blank slate and it uses the building blocks to create a workspace and add content to it. The building blocks open up a lot of possibilities to fully customize the workspace the way you want.

It also comes with many pre-built templates that are easy to import and start using right away. However, if you need something custom or unique then there’s nothing stopping you from creating your own template. There are plenty of options for customization in terms of colors, fonts, layouts, etc.

Both apps have a very user-friendly interface. However, if you only need a simple solution for taking notes, OneNote is the app for you. If you are already into the Microsoft ecosystem, you’ll find OneNote very similar to other productivity apps from the Microsoft suite.

This isn’t to say Notion isn’t any good. It may take some time to get to know Notion, but once you do, Notion is a very powerful app for a variety of use cases.

OneNote is primarily a note-taking app whereas Notion is a workspace collaboration and note-taking app. Whether you are a student or a working professional, taking notes in productivity apps like these can be very helpful.

Because OneNote is primarily a note-taking app, it includes numerous note-taking-specific features to assist you in taking better notes. Aside from jotting down your ideas, you can also include images, videos, tables, math equations, and other elements in your notes.

OneNote has a unique feature that allows you to draw inside your notes using various drawing tools.

Notion lets you create content inside pages and can also work as a note-taking app. Notion uses the building blocks which can be text, to-do list, numbered and bulleted list, audio, table, file, video, code, and much more.

Notion also has database blocks that can be used to organize content and create complex structures inside a page.

Notion and OneNote both offer great note-taking features. OneNote is easy to use and offers simple tools. OneNote has paragraphs and headings for content while Notion uses different blocks.

Notion lacks the drawing tools features that OneNote has but still provides a good alternative if you are looking for an all-in-one solution. The main difference between these two platforms lies in their functionality.

Notion and OneNote both offer great features that make them unique in their own way. Both apps are built with a focus on notes and collaboration. The key difference lies in how each app implements these collaborative features.

OneNote doesn’t have many unique features because it focuses on being a simple note-taking app. You get the standard text formatting options as well as the ability to add images, audio, and video to the notes.

OneNote also allows you to draw on the notes with the touchscreen or write on the touchscreen and then convert the ink to text. This is a great feature for people who take notes on touch devices like the iPad.

Because Notion is an all-in-one workspace app, it has a wide range of features. The building blocks are categorized as basic and database blocks. The database blocks are extremely useful for organizing your pages and content.

Another feature I like about Notion is the ability to embed from a variety of external websites. You can embed a Google calendar in Notion as well as use live Noion widgets that automatically update content.

The best thing about Notion is that it allows you to do a lot of work without leaving the app.

When it comes to unique features, Notion takes a lead with having features to fully customize and create complex workspaces. It lets you easily build relationships between databases and link one database to another. OneNote is more of a simple app and lets you easily take notes without many complex features.

Since both the apps are online and sync everything on the cloud, they need storage.

Notion with its free plan offers to add unlimited content and blocks. For files, Notion limits the file size to 5MB per file. If you subscribe to the Pro plans for personal and team, you get unlimited storage with no restrictions on the file size.

OneNote takes a different approach for storage. It is tied to the Onedrive storage and there are no restrictions on how many individual notes a OneNote user can save. OneNote Basic accounts offer individual uploaded file size restrictions of 25MB. Both Premium and Business subscribers are limited to uploads of up to 200MB per file.

While Notion does have limitations on individual file size, it offers unlimited uploads for both the free and the paid plans. It also lets you add an unlimited number of blocks in both versions.

Notion and OneNote both come in free and paid plans. The free versions of both apps are very feature-rich and are perfect for basic note-taking and organization.

The free version of Notion lets you add an unlimited number of blocks and files but the individual file size is restricted to 5MB. Other than this, the free version also restricts the number of people you can share the workspace with to just 5.

The Pro and Team plans of Notion remove both these restrictions and offer unlimited file upload of any size along with sharing and collaboration. The Pro plan starts at $5/month and the Team plan starts at $10. If you take the annual option, both the plans offer two months free.

The pricing for Basic Business Plan starts at $5/user/month and goes up to $20/user/month for the Premium plan.

In most departments, Notion outperforms OneNote. Notion is a productivity and organization app that does everything. It has a better user interface than OneNote and makes it easier to find items within the workspace.

You get a wide range of blocks that allow you to add a variety of content to the page.

OneNote, on the other hand, allows you to create multiple notebooks to which you can add content. OneNote, unlike Notion, does not use databases to organize content.

OneNote is better for people who are deeply embedded in the Microsoft ecosystem because it is simple to use and all of their files and content are linked to a single Microsoft account. 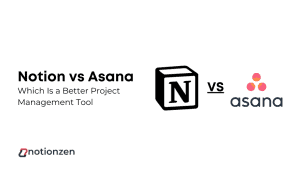 Notion vs Asana: Which Is the Best Project Management Tool 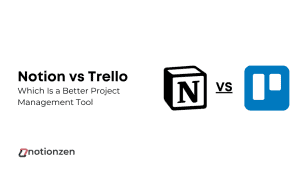 Notion Vs Trello: Which Is The Better Project Management Tool? 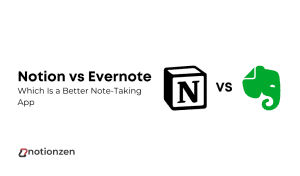 Notion vs Evernote: Which Is a Better Note-Taking App?